Why Aptos/Sui will eventually embrace zkEVM-based zkRollup it?

Kang water jump: the Aptos/Sui future whether as a mainstream public chain stands out, not only with the language used, more is depends on the future of the chain on the project’s imagination.

The blockchain industry is currently a countless number of Layer-1 of the project, including Bitcoin, Ether workshop, BNB Chain, a Polygon, a Solana, the Avalanche, Near, Fantom, a Tron. Even in this competitive era, with different characteristics and advantages of the L1 new public chain is also in the successive emergence, the technology is also in constant iteration. We expect that future includes Aptos and Sui in almost all Layer1 will eventually embrace zkEVM-based zkRollup, the future will eventually appear Omnichain zkRollup。

As of 2022, many emerging industrial chain, the most attention is the so-called Diem L1 public chain, including the main Move of the smart contract language of Aptos, the Sui。 Aptos/Su is by once in a Meta former Facebook developed Diem original Libra of Engineers initiated Diem is Meta the company’s proprietary blockchain and its stable coin name. These projects are inherited Diem of many features at the same time with the existing L1 public chain in the performance, the programming language and the mechanisms have different characteristics.

Aptos/Sui is the programming language used by the Move of the characteristics is that it is completely re-defines the“module structure”, the tokens, NFT, smart contracts and other assets to be able to use a single data module for simple modular definition. This is too Frank EVM incomparable–any use of the EVM development of the people will know in Solidity using the module structure and the nested structure is how difficult. Consider the classic weight into the attack Re-entrancy Attack it. This has plagued the EVM system of the project for a long time, often resulting in millions and millions of dollars of losses due to the Move language used is based on the resource method, so the Move is not likely to occur weight into the attack.

Aptos/Sui future whether as a mainstream public chain stands out, not only with the language used, more is depends on the future of the chain on the project’s imagination. If ETH is a 4-lane, while the lane is not wide but steady stream of people coming and going, and occasionally mingled with the congested roads of the complain, then Aptos/Sui is like the 8-lane highway, with the best of the asphalt-the-art security lights, but it seems like not too much traffic. For the public chain, on the one hand of technology and innovation, on the other hand it is a public chain project for the chain itself, the flow of the feed, without application of the public chain even if the technology gets too hard to stand out.

How to Aptos/Sui established on zkEVM-based zkRollup

In the long term, zkRollup will become one of the most concise, high security, efficient capacity expansion programme. From the principle on the terms of a zkRollup can be deployed on any network(as long as the network can verify this zkRollup send the proof), so we can certainly be in Aptos/Sui established a zkEVM the zkRollup。 So, what good does it do? The first is to absorb from the EVM developers and users, for the developers, the product is deployed in Aptos/Sui on a high compatibility zkEVM-based zkRollup just like the product is deployed in Ethernet workshop or other EVM-compatible chain of the same, without them having to modify too much code and design. This means that there zkRollup after, in the EVM ecology of the developer can be almost zero cost of their applications to migrate to the Aptos/Sui Eco in. In this case, as long as there is a small incentive, are able to attract a large number of EVM system in the success of the project to migrate the deployment of Aptos/Sui bring a large number of ecological and context. On the other hand, for the user, zkRollup allow the user to further enjoy less(even the non-sense)of the fee, and the opportunity in interactive speed and the payment mode to get close to the traditional application of the experience. Such a vision is undoubtedly exciting, so how do we in Aptos/Sui established a zkEVM-based zkRollup it? We take a look at Fox Tech design of General-purpose zkEVM-based zkRollup model. 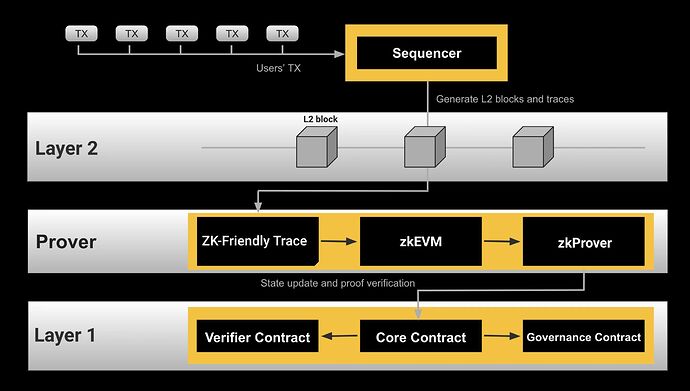 First of all, we need a Sequencer, is responsible for receiving zkRollup on the transaction, by one with EVM node performs transactions, to ensure that the EVM compatibility, in this process, the Sequencer will generate an easy-to-prove the implementation process of recording(Trace), and send it to prove packagers zkProver。 zkProver is a zk-EVM proof of producers, zk-EVM eventually complete according to the EVM design zero-knowledge proof circuit, can verify the execution of the recording process is correct(i.e., whether and EVM implementation of the rules match), using the final set of zero-knowledge proof algorithm to generate a zero-knowledge proof, and the proof is sent to the Aptos/Sui on. Finally, we also need to be in Aptos/Sui deploy several parts of a contract:we need a hosting zkRollup assets of the contract, the contract will manage the assets in Aptos/Sui and zkRollup between the flow. We also need a verification of the contract to verify zkProver send a proof and a governance contract, manage permissions problems(such as records of Prover and registration zkRollup of the asset type).

The future of Web3 network of eco will not Ethernet Frank a single large, but many public chain and stored rival, the assets cross-chain and cross-chain interaction thus becomes important needs. If we consider the traditional Cross-Chain Bridge, if the first regardless of the security, so if only 3 of the chain only need 3 across the Chain Bridge, but if there are 5 strand would need to be 10 across the Chain Bridge, and a 20 strand would need to be nearly 200 Cross-Chain Bridge in order to achieve these chain between the two direct communication.

Therefore, a Omnichain zkRollup will eventually become cross-chain and even the whole chain of the application of the final quality possible. In the above-described General type zkEVM-based zkRollup on the basis of access in addition to a Ominichain Interoperation Protocol, which is the next five years is very important race track, the player has LayerZero, the HyperLane, the Way the Network, etc., thereby forming a so-called Omnichain zkRollup。 It will bring together from the whole chain of asset liquidity, playing the full chain Executive level roles. It is through zero-knowledge proof to ensure that the transaction of the correct type to enjoy with the whole chain of the sum equivalent security. We envision a Omnichain zkRollup will be implemented from the full-chain assets and information fully programmable Interactive, the user can pass this on to send a transaction to initiate such interactions, these interactions will change from individual chain on account of the state, Omnichain zkRollup will be calculated in units of blocks and in each chain to update the state, and submit status updates of proof.

Omnichain zkRollup vision contains infinite possibilities, one can deploy to bring together all of the chain to the center of the exchange; you can create collection full chain user GameFi and SocialFi; and is even more diverse, more diverse, more is not the boundary of the applications will become possible.

This for putting this article together.

Yes, anybody can read and understand what it is.

Thank you for that job!

Thank you for sharing